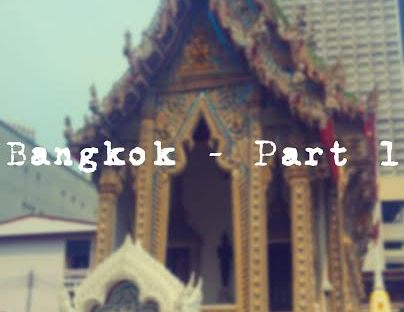 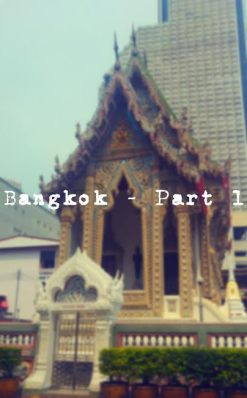 We are currently on a 5 or so hour coach journey from Sukothai to Chiang Mai, so I thought I should probably try be at least a little productive. We’ve been in Thailand for a little over a week now, but it’s proving to be difficult to find time for updates, therefore I’m going to try reminisce our first few days in Bangkok.

Tues 2nd May – Day 1
After a total of 14 and a half hours of travelling, we landed in Bangkok. It took us a while to figure out how to actually get a taxi at the airport, it turned out you had to go to a machine which would give you a number of a parking space with a taxi waiting there for you. Actually a pretty good system once figured out.
We had a 40 minute taxi journey through the city before we reached Silom, the area of Bangkok where our first hostel was located. This hostel, was probably the nicest hostel we’ve had so far, mainly due to the fact we had our own private bathroom.
We had managed to get quite a bit of sleep on the plane, so had the energy for a little explore. We decided to walk to a close street called Patpong to look at the market and try scout out some food. For those of you who don’t know, Patpong is an area famous in Thailand for it’s strip clubs and pingpong shows (I’m not going to explain what that is on here). Walking down this street, we could hear the music from each individual club as their doors are left wide open. This also means you can see inside each one as you walk past. I felt a bit bad that the people who stopped us every 30 seconds to try persuade us to go in, were met with my awkward giggling from seeing women in fluorescent underwear dancing around poles. We decided against going to a pingpong show too as after researching, we found that they mainly serve to trick money out of tourists. However, we did see the list of tricks e.g. shooting balloons with darts and writing your name, the thought of which was disturbing enough. Instead we found a small restaurant, ate some noodles, drank some Chang and called it a night.
Wed 3rd May – Day 2 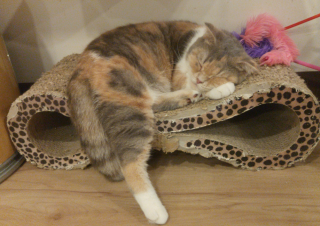 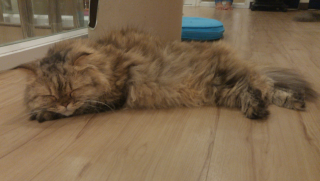 Today was rather chill, mainly due to the fact we didn’t wake up until about 1pm due to jet lag. The maids gave up waiting on us and came in to clean our room while we were still getting our bags ready to go out.The day was again mostly walking around and exploring the city. Stumbling across a Cat Cafe was probably the best part of the day. I had what was probably the best mango smoothie in the world and got to pet cute cats for an hour.
After the cats, we walked to Lumpini Park and wandered round before sitting down by the lake. While we were there, I was sure I could hear a rustling every now and then coming from the bush next to me. My boyfriend was making fun of me and saying it was nothing, so we stayed and chatted for around an hour about what our plans were for the next few days. When we decided it was time to go, I grabbed my bag and turned back to face the bush when I saw this HUGE lizard crawl out of a hole under the bush. Monitor lizards live in the park but apparently are rare to see, I couldn’t believe I had actually seen one. It crawled out of the hole and stayed by the edge of the lake just long enough for us to get a photo before it slipped in. The walk back consisted of multiple “I told you so”‘s. 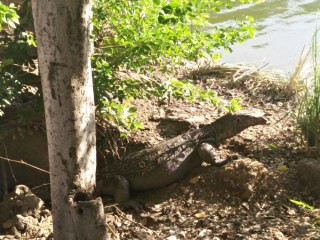 That night we went out for some street food and found a place down a road full of little pop up restaurants. It seems very dodgy, sitting on plastic chairs and ordering very cheap thai food which gets cooked outside right next to you and placed in front of you in about a minute. It’s a way if life here though, and something to definitely embrace if you are travelling on a budget (like us), a meal can cost under £1.
Thurs 4th May – Day 3
Ok so I was sick this morning. But I definitely did not blame the food. It takes a while for your body to adjust to travelling and eating different foods, plus I walked around the park for most of the day without wearing a hat (very silly). Sadly, this meant we had to cancel our pre-booked bicycle tour around Bangkok, but luckily they completely understood and moved us to Saturday with no extra cost. 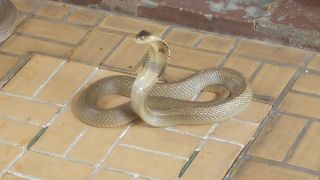 I soon felt well enough to go out, so we planned to visit a local Snake Park, located at a hospital. The hospital uses the snake’s venom to create medicine for their patients, which is pretty amazing. It was quite a walk to get there but it was cheap to get in and the snakes seemed to be in good living conditions, so I was happy. We purposely arrived in time for the 2.30pm show, which we had heard great things about online. It was CRAZY. The handlers were getting bitten, charming cobras, and we got to hold a huge Python. The show was entertaining and extremely informative, I was not aware just HOW many different venomous snakes are in Thailand, so that’s a fun thing to worry about. 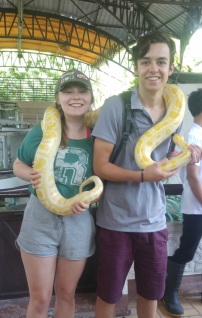 That evening we visited one of the best seafood restaurants in Bangkok, which would have been reasonably priced, had the waiters not screwed up and given us one of the most expensive fish on the menu by accident. We were extremely hungry and they put the fish on our table maybe 5 minutes after we had ordered, we only realised it was a mistake after we had shovelled it down and the rest of our food took around 15 minutes to arrive. Unfortunately, we were unable to communicate that there may have been a mistake and the waiters didn’t understand, so we had to pay for it. We look back and laugh now though.
So those were our first few days in Bangkok before we moved to a different part of the city. These were a good first few days to settle in and chill a little bit. From here on it’s temples temples temples pretty much. Hope you enjoyed.
Lon x 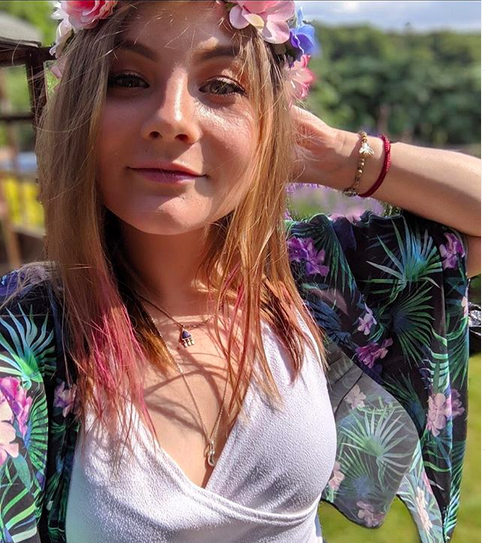 Hi there, I’m Lon. A 21 year old Brit who’s had a lot of adventures all around the world. I love to travel more than anything and have a true passion for sustainability and the planet, which is what inspired me to become vegan!  I hope you grab a plant milk cuppa and enjoy x

The Seychelles had such stunning views ✨🌿🌊⛵️☀️ • • • #newyear #island #islandlife #seychelles #beach #whitesand #hot #holiday #travel #travelblogger #africa #blue #green #nature #beautiful #photography #blogger #plants #trees #takemeback #exploring #boats #sea #views #horizon #coral #bluesky
She’s a little camera shy but that’s ok, we still love her 🐢🐢🐢 Seeing free roaming giant tortoises was so amazing 💖 • • • #seychelles #travel #holiday #newyear #newyearsday #2020 #tortoise #gianttortoise #tortoiseisland #africa #eastafrica #islandhopping #islandlife #blogger #travelblogger #green #nature #sun #sand #beach #tropical #palmtrees #animals #travelblog
Not a bad way to see in the New Year...on a tropical island😉🌴☀️🌊 • • • #newyear #island #islandlife #seychelles #beach #whitesand #hot #holiday #travel #travelblogger #africa #blue #green #nature #beautiful #photography #blogger #imback #plants #trees #takemeback
✨NEW BLOG POST✨ 10 things I’ve learnt being vegan for 2 years 💚 I recently celebrated my veganversary and wanted to put together a little post of some of the things I’ve learnt. It’s up on justakidd now ✨ • • • #veganversary #blogpost #vegan #veganblogger #blog #blogger #veganinspiration #cow #lifestyleblogger #sustainabilityblogger #ecoblogger #new #discoverunder1k #plantbased #govegan #2yearsvegan #backtoblogging
Who else hates fast fashion🙋🏼‍♀️🙋🏼‍♀️🙋🏼‍♀️ I now hardly ever buy anything fast fashion and managed to bag this super cool over shirt for FREEEEEEE at a swap shop event 💃🏼💚 what a result! I also grabbed 3 other items (all for free) and handed in a pair of trousers I never wear. If you aren’t grabbing slow fashion bargains at this point then WHY not?!?! Charity shops and depop are amazing 🙅🏼‍♀️ no excuse at this point to not be trying to find second hand items first ♻️ • • • #slowfashion #blogger #lifestyle #lifestyleblogger #ootd #stopfastfashion #ecoblogger #ukblogger #swapshop #donate #secondhand #zerowaste #ecofriendly #discoverunder1k #blog #femaleblogger #makeup #outfit #sustainable #sustainablefashion #red #fashion
Erm...hi everyone. I don’t know what I’m doing with my hand so please ignore that🤦🏼‍♀️ I’ve needed a bit of a break recently because I’ve been feeling pretty rubbish, so this page has been rather quiet. I’m ready to get back into it though because I’ve missed blogging and instagramming so much, I just needed to wait for some inspiration💖 This was my very first look using the Jeffree Star X Shane Dawson Conspiracy palette and I absolutely love it! I really don’t wear a lot of makeup so this was rather extra for me but I felt amazing 💁🏼‍♀️ Have any of you guys got the Conspiracy palette? What do you think of it? 👽 • • • Shades: diet cola, not a fact, spiraling, diet root beer, sleep paralysis, my pills #selfie #blogger #makeup #jefreestar #shanedawson #conspiracypalette #eyeshadow #imback #fluffyjacket #lifestyle #lifestyleblogger #ukblogger #discoverunder1k
Brighton, your fireworks are magical 💕🎆 • • • #brighton #brightonfireworks #fireworks #fireworknight #bonfirenight #5thnovember #november #favourite #love #colours #magical #beautiful #blogger #ukblogger #brightonblogger #lifestyle #lifestyleblogger #iphonecamera #video #discoverunder1k
Whenever autumn kicks in, I think of this gorgeous photo. An old but gold one of my grumpy old man, Cooper. This is before all his grey hair started growing in though 😂❤️🐶 • • • #labsofinstagram #labrador #chocolatelab #autumn #leaves #walkies #dog #🐾 #golden #orange #autumwalks #love #lovehim #blogger #blog #lifestyle #lifestyleblogger #photooftheday #cute #discoverunder1k
These are my cat jeans 🐱 The other day I sat opposite a man on an early morning train, when he got up to leave he told me they had made his morning because he has 2 cats at home he hates leaving when he goes to work ☺️💕 Well that made my whole day! These jeans are originally from Monki but I got them off depop and I get compliments on them so often! The joys of sustainable slow fashion💙 The shoes are also second hand 😉 • • • #slowfashion #sustainability #secondhand #depop #ebay #thrifting #momjeans #cat #catjeans #sustainable #sustainablefashion #fashion #ecoblogger #sustainableblogger #eco #stopfastfashion #stansmith #ootd #outfitinspiration #colourful #blogger #ukblogger #discoverunder1k