Monday 8th May
Bangkok to Ayutthaya is an easy journey, an hour and a half on a mini bus. I mean, it’s made a little harder when you can’t make your way around the bus station because you can’t see through the rainfall. We were told the mini buses were just across from where the buses were parked. However, to get to that part of the station you have to cross a road, a road which at this point, was a river. There were traffic cones were floating down it. We weren’t sure what time the bus would leave due to this heavy storm, so at this point we were taking shelter under the only roof for this outside part of the station. Not to mention we were not prepared for this rain, my boyfriend didn’t even bring a waterproof on the trip. I was wearing long trousers thinking they would be more comfortable for the journey (SPOILER: they were soaking wet for the whole thing). We managed to find our flip flops in our big backpacks without too much fuss, but as we were about to wade our way through the shin deep water, somebody stopped us to stay it was too dangerous to walk through while there was still lightning. GREAT.  However, that didn’t seem to phase that SAME PERSON 10 minutes later when they ditched us and got on the minibus, without telling us which one it was. It’s funny to look back on now, but at the time, sitting with wet trousers and wet bare feet and our backpacks on our laps honestly wasn’t the best.

Ayutthaya itself had beautiful weather, thankfully. As soon as we got off the bus, we were approached by people offering tuk tuk tours. This is the best way to see the old city in one day, so long as you don’t pay more than 200 bath an hour. We went with a woman who drove us to our hotel. In just a 5 minute journey this woman managed to tell us all about her family and get incredibly excited about the fact I am the same age as her daughter. She was hilarious. We then dropped off our bags and her husband drove us around in a tuk tuk for the rest of the day. He was a lovely man and even gave us advice on how to get our bus tickets to Sukhothai for the next day and drove us to the station for them at no extra cost.

The only bad thing about this tour was he dropped us somewhere very expensive for lunch, expensive because they obviously had different prices for foreigners. Even after paying too much, they requested a tip from us. Tipping isn’t really a custom in Thai culture, but they know it is to us and so some people choose to take advantage of it. It is understandable that we are seen as having more money because we’re English, however the reality is we are two teenager backpackers on a serious budget to make 3 months in South East Asia. You are definitely going to be scammed and overcharged throughout travelling but try keep on top of it and question it when you feel comfortable. Your budget will thank you. 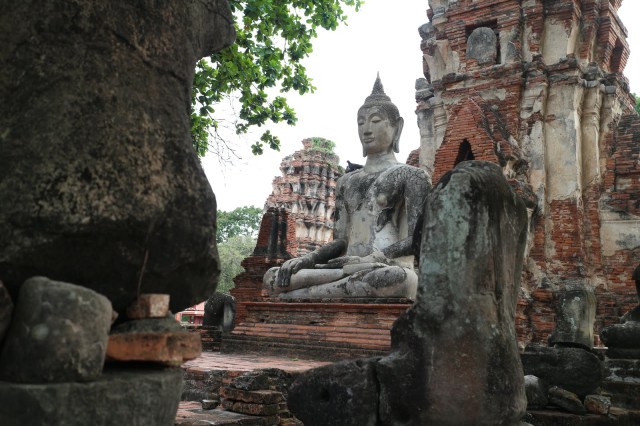 Our hostel was run by a CRAZY lady. The hostel itself was questionable, our bedroom closed by a sliding metal door which was secured with a padlock. She, unfortunately wasn’t very helpful. She left our passports in clear sight on the Reception and in the morning when we had to leave to catch the bus to Sukhothai, we were met with shutters blocking the doors and nobody anywhere in the building. had to shout out “hello” and bang on a door for her to wake up and raise the shutters for us, even though reception was supposed to be open by this time.
Bad things out of the way, Ayutthaya is a beautiful ancient city to have a day trip in. The tuk tuk driver has a map of all the sights to see and you can choose which you are interested in (say no to the elephant riding tho duh). We saw amazing old temples, hundreds of broken Buddhas and structures from centuries ago, even a Buddha head stuck in the middle of a tree. I honestly don’t know the names to any of these places, which I know isn’t helpful but I have lots and lots of pictures. 😁
This day trip definitely showed us first hand that everything will not go according to plan while you’re travelling. Something we are reminded of pretty much everyday of our trip, but it wouldn’t be an adventure otherwise.
Lon x 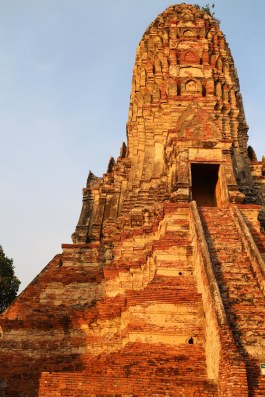 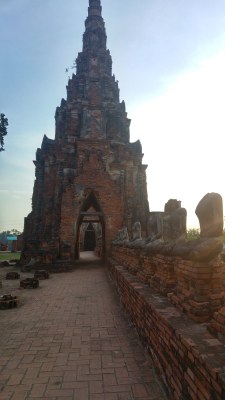